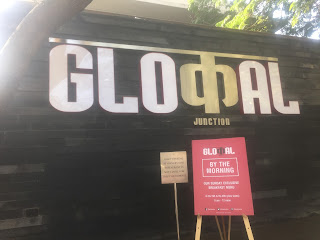 The Glocal Junction in Andheri West is this new outlet nestled in the Laxmi Industrial Estate. It gives you the feel of being in an industrial zone with a greyish- blackish setting and shop floor instruments like spoons, forks and knives on your table. 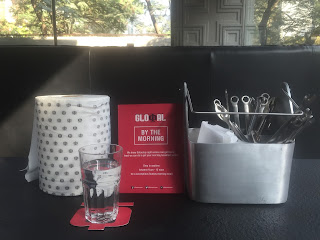 The place totally stands out in the Mumbai food scene as it used the internationally popular way to spread word about its existence- The Glocal Junction Food Truck. The Truck was plying in the Laxmi Industrial Estate are from January 25th - January 29th entertaining the work stricken employees in this busy area. 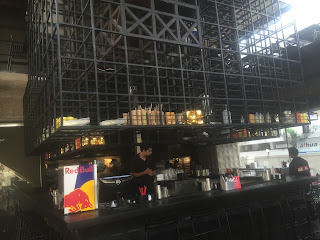 As the name suggests, 'Glocal' with a Devanagri 'K' in the middle, this restaurant serves you a cuisine inspired by global food and amalgamated into local food. Chef Gaurav has been successful in creating these soul warming dishes which are a combo of true blue classics as well as clever new tweaks. 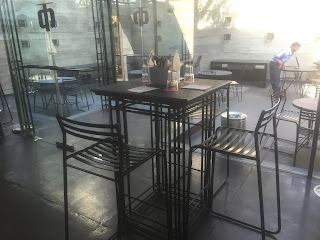 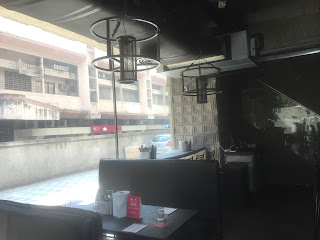 We started off our Breakfast with some detoxifying raw juices. It is the perfect way to rejuvenate yourself for the entire week ahead. Among these uber healthy options, we loved the Beetroot Mint juice while the Maltese Orange Juice was just fine.

Next we laid our hands on their Samosa Stuffed French Toast which tasted more like Bread Pakoda. We especially loved their Imly and Chilli Pickle Mayo Chutneys! If for nothing else, you have to call for this for it's lip smacking chutneys!

We then tried their Sulaimani Chai which was akin to an English Tea. It wasn't something extraordinary, however I loved the way in which they had presented it to us.

Next we were served with some Palak Paneer Cup Cakes, have you ever dreamt of something like that? I am sure not... But trust me, it's one of the best cupcakes I have ever had! These desi inspired cup cakes are savoury and the cheese in them is guaranteed to chase away your blues.


Then we had some rich, ghee laced Masala Makai Roti with Harissa, Kajeri Sriraja and Safed Makhan. These were nice and fluffy but best had when hot. Honestly, we were so overwhelmed with all the other delicacies that these didn't seem to really stand out.

We then treated ourselves to some Nasheeli Chai which was more like a Chai Cocktail. You could actually taste the Vodka infused in the Chai and as you had more and more of it, the flavour of the alcohol grew more and more intense.

Now, the star of the morning was the Waffich which was basically Eggs Gone Chic! It was a combination a savoury Waffle and a sandwich as it was stuffed some Omelette, Cheddar Cheese and Caramelized Onions. It was the best thing, I have had at this place! You just can't miss out on this one.

We finally ended our Kingly Breakfast with some Pancakes which were so indulgent! One of the best Pancakes you'd get in town, topped with some butter and blueberry compote, stuffed with some musk melon and accompanied with maple syrup and Basil Cream. This is surely worth it as it comes for a price of only Rs. 195. It is rightly named the Sabr ka Fal Pancakes.

So, all in all, a Sunday Breakfast at the Glocal Junction is a must try for all you foodies out there. Dig into their Glocal delicacies for once and you'll unashamedly be a breakfast junkie from then on...