THE HOUSE OF MIRABELLA | MUMBAI

I was invited to The House of Mirabella for a review as they are revamping their current Menu. The place has a Middle Eastern Arab styled vibe with wall paintings, furniture and dim lighting to set the mood. We were hosted at The Terrace which had pretty ferry lights around the railing however it was hot to be able to enjoy the weather that day.

The Chef himself came up to us to explain the concept of the place and the food that we would be served. He was quite warm and hospitable and the attendants too were quick on the uptake. However, all of this came as a delight to me as I had heard from a few of my friends who had visited the place before me that the service needed to improve here. However, I did not face any such issue.

We started off with the Watermelon Mojito served to us in a half cut melon. I am very fond of Watermelon as a fruit so I thoroughly enjoyed it. However, it tasted more like Watermelon juice and lacked that element of zing that you have in a Mojito. We also tried their Thyme Rosemary Lavender Martini which was a novelty as we hadn't really had something like that before. The two drinks went really well with their Mezze Platter. They had got all of their dips just bang on! 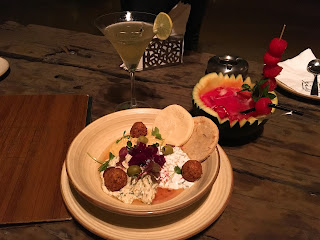 We were also served some Wild Mushroom Soup with which I wasn't all that happy. The wild mushrooms were very chewy and moreover the soup was runny. I instantly compared this to the Mushroom Cappuccino at Ithaka which was thicker and therefore more enjoyable. 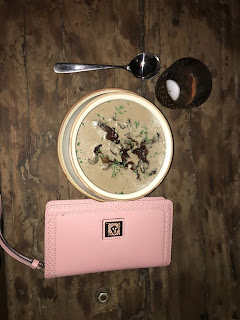 We then laid our hands on some Manchurain Sev Puri which was nothing but a dry Manchurian patty with chutneys and Sev Puri toppings. They can actually add in some 'Chindian' chutney along with the Green Mint Chutney to make it a proper fusion of Chindian Chaat. 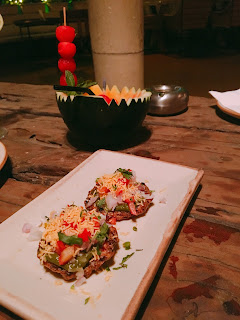 We also tried the Potato Rosti with Caramelized Onions and Sour Cream which was extremely salty. Probably they deliberately made it salty to counter the sweetness of the caramelized onion jam. But it did not seem to strike the right chords. Their Veg Triangles were also quite average as the stuffing was lesser than the puff pastry which dominated the taste. 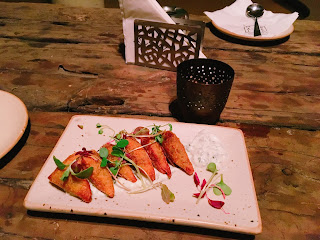 The next two dishes were the ones that we enjoyed - Olive Tapenade Spaghetti and the Veg Enchiladas. The Spaghetti was pretty oily and slightly bland, it could have been jazzed up with a dash of some more garlic and herbs but the young chef won us over with it's aroma. The Veg Enchiladas was cheesy and indulgent. We didn't expect anything authentic Mexican or Tex Mex but you can't really go wrong with cheese, can you? 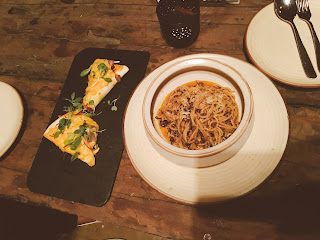 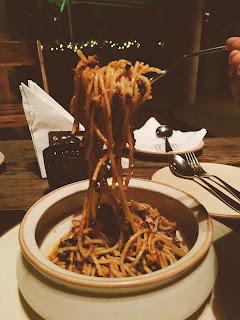 We ended our meal with a Baked Cheesecake & a Baked Flourless Chocolate Flan. The Cheesecake was nice and won us over and even though all the other dishes were pretty average, we were happy to have concluded with the Baked Philly. The Flourless Chocolate Flan was also good however, the taste of coffee dominated. Overall, we had a pleasant experience at the House of Mirabella even with the limited Veg Options and it is more of a multi cuisine restaurant than a Mediterranean or Middle Eastern one as is evident by the dishes we were served. There is a lot of scope for improvement considering their good location.